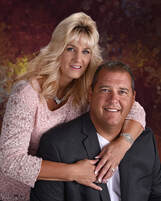 Wednesday, August 14, 2019
​​
Sermon Title:  "Unity of Spirit"
Speaker........: Pastors Kris & Kelly Kauffman
To download, Right-click, Save link as...
Scripture References:
​​
Acts 2:43-47 (KJV)
43 And fear came upon every soul: and many wonders and signs were done by the apostles.
44 And all that believed were together, and had all things common;
45 And sold their possessions and goods, and parted them to all men, as every man had need.
46 And they, continuing daily with one accord in the temple, and breaking bread from house to house, did eat their meat with gladness and singleness of heart,
47 Praising God, and having favour with all the people. And the Lord added to the church daily such as should be saved.

Acts 3:1-10 (KJV)
1 Now Peter and John went up together into the temple at the hour of prayer, being the ninth hour.
2 And a certain man lame from his mother's womb was carried, whom they laid daily at the gate of the temple which is called Beautiful, to ask alms of them that entered into the temple;
3 Who seeing Peter and John about to go into the temple asked an alms.
4 And Peter, fastening his eyes upon him with John, said, Look on us.
5 And he gave heed unto them, expecting to receive something of them.
6 Then Peter said, Silver and gold have I none; but such as I have give I thee: In the name of Jesus Christ of Nazareth rise up and walk.
7 And he took him by the right hand, and lifted him up: and immediately his feet and ankle bones received strength.
8 And he leaping up stood, and walked, and entered with them into the temple, walking, and leaping, and praising God.
9 And all the people saw him walking and praising God:
10 And they knew that it was he which sat for alms at the Beautiful gate of the temple: and they were filled with wonder and amazement at that which had happened unto him.